What is EIS ? (Electrochemistry Basics Series)

Electrochemical Impedance Spectroscopy (EIS) is a powerful tool enabling the study of processes that occur at the interface of an electrode.

The transfer function H of the system is defined as:

ℒ  being the Laplace transform

Measurements as a function of the frequency of the perturbation give an impedance, Z,  (or admittance) diagram. The impedance is given in Ohm as it is the ratio of the voltage vs. the current and is a complex number.

To be valid, the system under study has to be:

The modulus Z and phase Phi are the parameters of interest, so the impedance data can be plotted in Bode plot (Z and Phi vs frequency), but in electrochemistry, the most common plot is the Nyquist plot -Im(Z) vs Re(Z).

As the periodical perturbation is performed at several frequencies, Electrochemical Impedance Spectroscopy (EIS) is capable of characterizing processes that have different time constants i.e. fast process at high frequency (> 10 kHz) and low process such as diffusion at low frequencies (<100 mHz).

How to interpret EIS data

To interpret EIS data, it is common to make an analogy between the experimental data and an equivalent circuit made of capacitor, resistor, inductance and element that mimic diffusion processes, which depends on the electrode reactions. The elements used to build the equivalent circuit have to have a physical meaning.

An EIS data modeling tool is required to be able to withdraw the value of the element of the equivalent circuit.

Below how it looks like in BioLogic EC-Lab software to select the appropriate equivalent circuit: 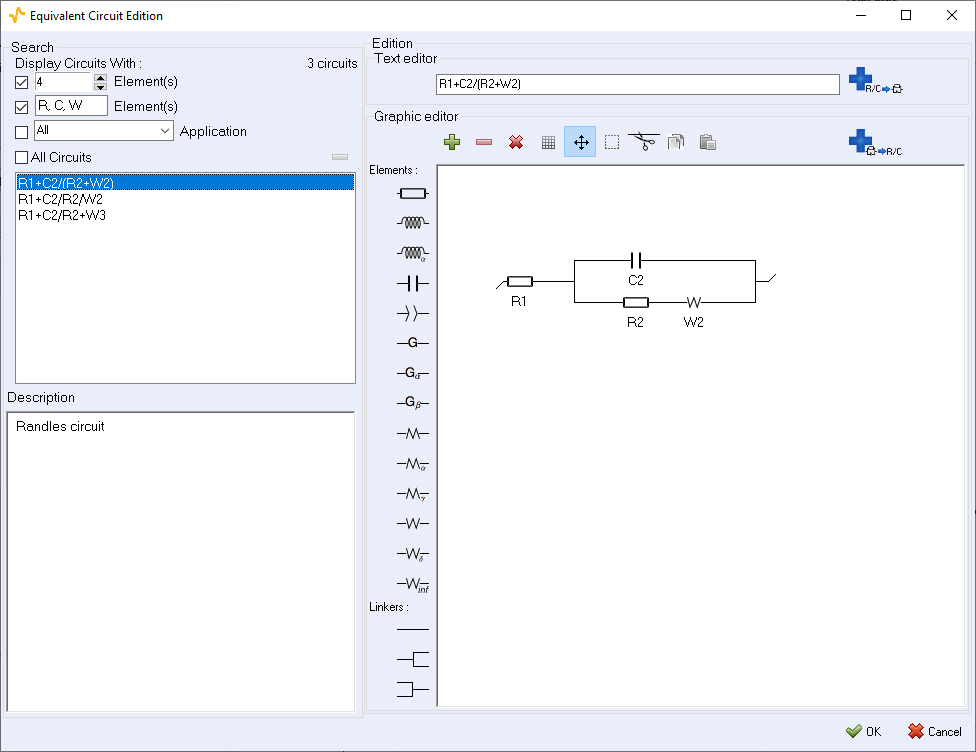 For more information on the BioLogic EIS modeling tool (ZFit), please have a look at the videos below:

Bio-Logic is a leader in Electrochemical Impedance Spectroscopy (EIS). Bio-Logic contributed to put EIS within every researcher's reach, by making it available on all its potentiostats and battery cyclers. Bio-Logic provides built-in EIS to make it easy and smooth for the user to mix DC and AC techniques. Electrochemical Impedance Spectroscopy (EIS) measurements can be made in both controlled potential and controlled current modes from 10 μHz to 7 MHz. The patented “drift correction” algorithm and multiple stability parameters allow users to acquire high quality data from their EIS measurements. BioLogic EIS-capable battery cyclers provide EIS over a frequency range from 10 kHz to 10 mHz for accurate and fast determination of the battery internal resistance on every channel.