There are various ways of performing Electrochemical Impedance Spectroscopy
(EIS) measurements.
Which one should I choose?

EIS measurements should be made on a system that is linear and steady-state. The linear behavior is assured by applying a signal with a small amplitude. In electrochemistry, the general notion of small amplitude is better understood with a potential input signal: without prior knowledge, a potential amplitude of 5 to 20 mV is considered small. PEIS is generally used in such experiments, however, there are times when GEIS is preferable. For example for low impedance systems such as batteries, or systems that change with time for example a corroding electrode. A third technique exists that combines the best of both worlds: GEIS-AA.

When is GEIS a better way of performing EIS measurements ?

Example one: When studying low impedance systems, for example a battery

When studying a system with a low impedance, for example, a Li-ion battery with a high-frequency impedance of around a few mΩ, a small potential amplitude will generate a large current, following Ohm’s law $U/R = I$..

A potentiostat works around a regulation loop and it will be more difficult for the electrochemical instrument to carry out a measurement in a situation where small input variations cause large changes.

To illustrate this point, if you are in the shower and small turns on the shower dial create large temperature changes it can prove very difficult to find the temperature you want – and can result in much frustration!

Likewise, the potentiostat / galvanostat will be more stable with low impedance or small load systems if it controls the current, when large current amplitudes induce small potential responses following Ohm’s law: $U = RI$.

Example two: When studying a system that changes with time, for example a corroding metal or a discharging battery

Figure 1. Description of the effect of (a) Potential Control (PC) and (b) Galvano control (GC) when the steady-state curve of the system is moving towards more cathodic potentials. Only galvano control at zero current allows users to follow the change of the corrosion potential.

The only way to perform the type of experiment illustrated in Fig. 2 is to use galvano control EIS. First a DC current is applied to the system to partially discharge or charge the battery, then an impedance measurement is performed with current control around a non-zero DC current ($I_1$ in Fig. 2).

What is GEIS-AA and why is better than GEIS ?

One could argue that even though it is preferable or even mandatory to use GEIS in the two cases mentioned above it is still difficult to know which amplitude to set to avoid a non-linear behavior of the system. This is why the technique GEIS-AA technique was developed. AA stands for Adaptive Amplitude. This is a technique that combines the best of both worlds: throughout the experiment the current is controlled, but the modulation amplitude is set in V, that is to say the input current is adapted by the potentiostat / electrochemical workstation to meet the target voltage amplitude. This way you do not have to worry about converting a potential modulation into a current modulation.

The results are the same as a potential controlled EIS measurement but use current control, which is mandatory for time-variant systems. This is illustrated in Fig. 3a. Furthermore, controlling a zero current instead of the initial OCP seems to apply a lower constraint to the cell as shown in Fig. 3b where the DC current during the impedance measurement for the PEIS is much larger than for the GEIS. 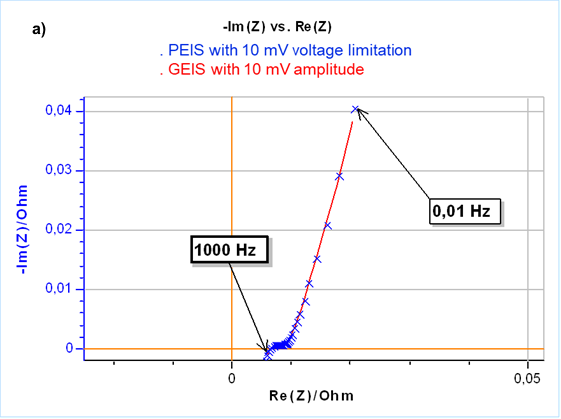 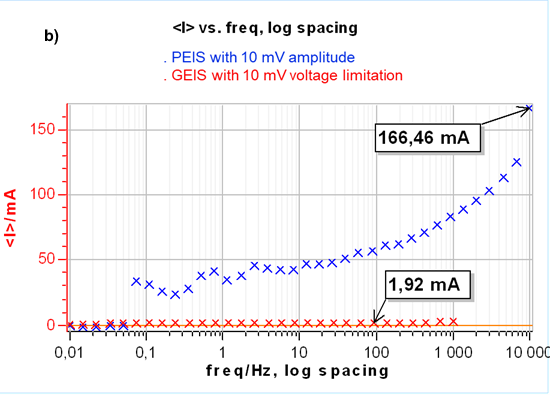 Figure 3: a) Nyquist representation of impedance measurements on a 26650 LFP battery cell using GEIS-AA (x) and PEIS (line) with 10 mV input modulation amplitude around OCP. For PEIS the OCP is measured initially at the start of the experiment and for GEIS-AA OCP is maintained by applying zero current. b) Corresponding DC current.

Are you running EIS experiments on a corroding electrode or on a charging or discharging battery and obtaining unusual or strange data at low frequencies? You should check that the change of your system does not affect your EIS measurements. Here are a few tools available in EC-Lab® to help you deal with such situations.
More info

To be considered reliable, EIS measurements must be performed on a system that is linear, in a steady-state and time-invariant. Quality Indicators are made available to users of EC-Lab® to ensure that the system fulfills these requirements.
More info

How to use electrochemical impedance spectroscopy (EIS) accuracy contour plots

EIS accuracy contour plots must be used to interpret errors made during EIS measurements and identify the best frequencies possible for a given impedance range.
More info