SECM101: Introduction to the redox mediator

Local electrochemistry: The importance of the redox mediator

The role of the redox mediator

Figure 1: When the probe is very near an insulator the diffusion of the redox mediator
to the probe is blocked resulting in a decrease in SECM signal.

Figure 2: When the probe is very near a conductor the redox mediator is
re-generated by the sample resulting in an increase in SECM signal.

Selection of a redox mediator

There are a number of questions to be answered when selecting a redox mediator for use in a dc-SECM measurement.

Does a redox mediator need to be added to the electrolyte? 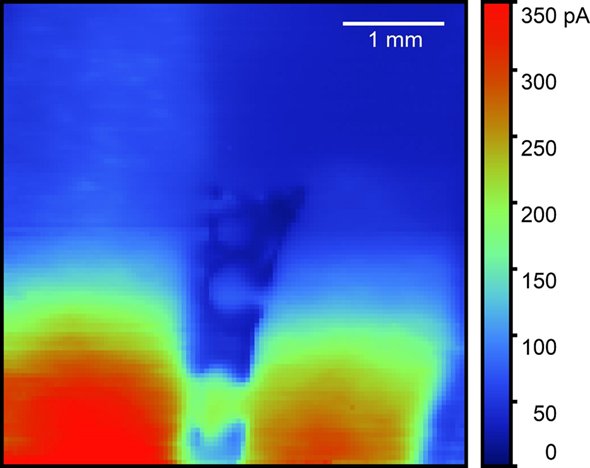 Figure 3: The steel weld was measured in 0.1 M NaOH. The probe was biased at 0.6 V
vs AgAgCl to oxidize Fe2+ to Fe3+, an example of a direct redox mediator.

Is a particular electrochemical interaction of interest?

dc-SECM is a chemically selective technique because the probe can be biased to interact with a specific electrochemically active species, it is therefore at times used to look at specific electrochemical interactions. When it is important to understand how a sample interacts with a given electrochemically active species, this species can be used as the redox mediator in the dc-SECM experiment. This is the case for some catalysis studies in which the redox mediator is selected because the sample is catalytic towards it. An example of this is the high throughput SECM studies of the Oxygen Reduction Reaction (ORR) at thin-film Pt catalysts by Lu et. al., in which the tip produced the O2 redox mediator catalyzed by the thin film sample [2].

Is there a poor interaction between the redox mediator and the sample?

When selecting a redox mediator, it is important to consider how it will interact with the sample. If a mediator is likely to interact poorly with the sample a different mediator should be considered. For example, when measuring living cells some redox mediators may be toxic to the cell. When this is the case the results may not reflect the conditions of interest and can have further unwanted side effects such as biological material coating the probe and reducing the signal. In these cases, the use of a different mediator should be considered.

Is the redox reaction under diffusion control?

dc-SECM measurements are typically performed under diffusion control to obtain the clearest images and to conform to theory. It is important, therefore, to consider whether the redox mediator undergoes a diffusion-controlled redox reaction within the electrochemical window of interest. When a redox reaction is diffusion-controlled it is apparent by a plateau in current in the cyclic voltammetry, as illustrated in Fig. 4. 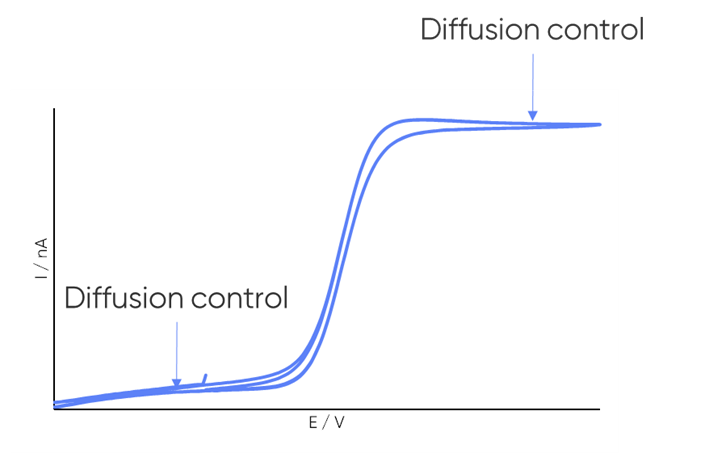 Is the redox mediator stable under the selected experimental conditions?

Is the redox potential of the mediator within the electrochemical window of the electrolyte?

There are many possible options for redox mediators in dc-SECM measurements, with extensive lists of these existing in the literature [1, 3, 4]. Some examples are given in Table 1 below.

Table 1: A limited number of examples of redox mediators used in dc-SECM are given.

What if a suitable redox mediator cannot be found?

Even with the wide range of redox mediators which have previously been used in dc-SECM measurements, in some cases, it is not possible to find a suitable redox mediator. This can occur, for example, when the mediator affects the processes under study, as is sometimes the case for corrosion studies, or when it is toxic to a living cell under study. In these cases, the closely related Alternating Current (ac)-SECM technique, which is performed almost exclusively without the use of a redox mediator, should be considered instead.

The redox mediator is a key component of the dc-SECM experiment. While there are a wide variety of mediators available some care is required in selecting the best one for a given experiment. Even when a suitable mediator cannot be found the SECM technique can still be used in the form of ac-SECM.

The scanning probe electrochemistry techniques on the M470 are compared.
More info