Scanning ElectroChemical Microscopy (SECM) is the most popular technique in the family of scanning probe electrochemistry. SECM is a chemically selective microscopy technique that allows the investigation and visualization of sample activity and topography. Unlike other scanning probe microscopies, SECM does not have an activity requirement, therefore it can be used on anything from fully conducting to fully insulating samples. Since its introduction in 1989 SECM has been used in a wide range of fields from batteries to biology, corrosion to catalysis, surface coatings to sensors, and more.

What are the different types of SECM?

dc-SECM is the original SECM type introduced by A.J. Bard, and is typically the form referenced by researchers. In dc-SECM a redox mediator is present in the system. The SECM is probe is biased to interact with the redox mediator, measuring the related Faradaic current. The Faradaic current measured by the probe reflects the electrochemical activity and topography of the sample. dc-SECM should be used when a particular sample-mediator interaction is of interest, for example in catalysis and ion transport through a membrane, when the sample produces an electroactive species, like the oxygen produced by plants during photosynthesis, or when the fastest measurement is required, such as when a dynamic, corroding sample is measured. There are a number of different classes of dc-SECM, though only the three most popular classes will be addressed: Feedback, generator-collector, and competition mode. 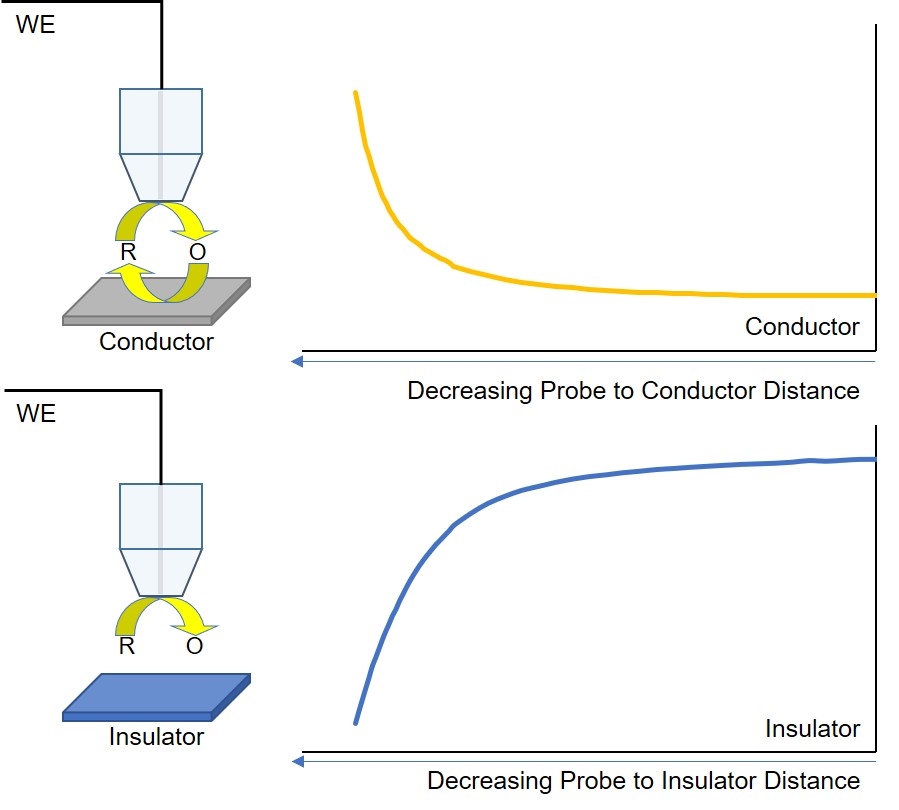 Figure 1: Diagram of the interaction of the probe and the redox mediator over active and insulating samples, and resulting feedback.

Feedback mode is overwhelmingly the most popular SECM experiment type, and the easiest experiment to set up. Feedback mode SECM is a diffusion-controlled measurement of a redox mediator which is added to the measurement electrolyte. While the probe is biased to interact with the redox mediator, the sample remains unbiased at Open Circuit Potential (OCP) throughout the measurement. Feedback mode SECM can be used to distinguish between areas of differing activity across a sample surface. When the SECM probe is near an active sample region, the sample interacts with the redox mediator to regenerate the species of interest to the probe. By increasing the concentration of redox mediator available to the probe, compared to in bulk, there is also an associated increase in current measured. This is referred to as positive feedback. Negative feedback, on the other hand, occurs when the probe is over an insulating sample region. In this case, the sample blocks the diffusion of the redox mediator of interest to the probe, reducing the quantity available to interact with the probe compared to in bulk solution. This results in a decrease in current measured. Both feedback types are illustrated in Fig. 1. It is also important to note that the interaction between the probe and the sample is distance-dependent, therefore the closer the probe is to the sample, the stronger its effect on the measured current will be. Due to this effect, the signal measured in feedback mode is a result of both sample activity and topography.

Due to its comparatively simple setup feedback, mode has been used in most application areas. It is particularly useful when relatively flat samples, or samples with isolated active regions, are of interest. 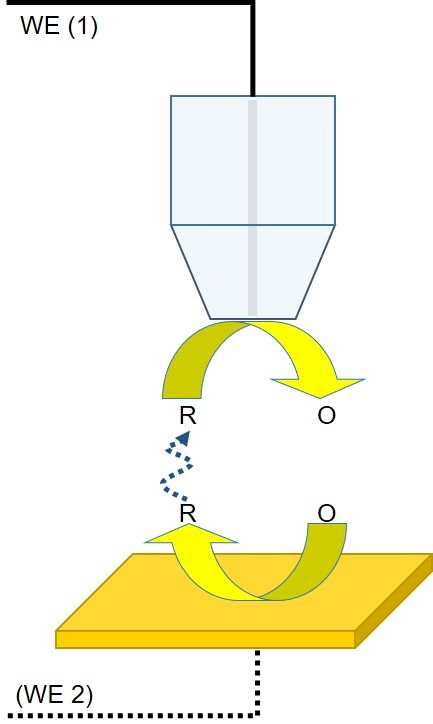 Figure 2: Diagram of the interaction between the probe and redox mediator in a SG/TC experiment.

In an SG/TC experiment, the redox mediator is generated by the sample for collection by the probe, with measurement occurring as the probe moves through the diffusion layer of the sample (Fig. 2). The sample may remain unbiased during generation of the redox mediator of interest, for example, through the release of ions during corrosion, or it may be connected as a second working electrode, and biased to produce the mediator of interest, for example, such as in cases of hydrogen catalysis where the sample is biased to produce protons then measured by the probe. 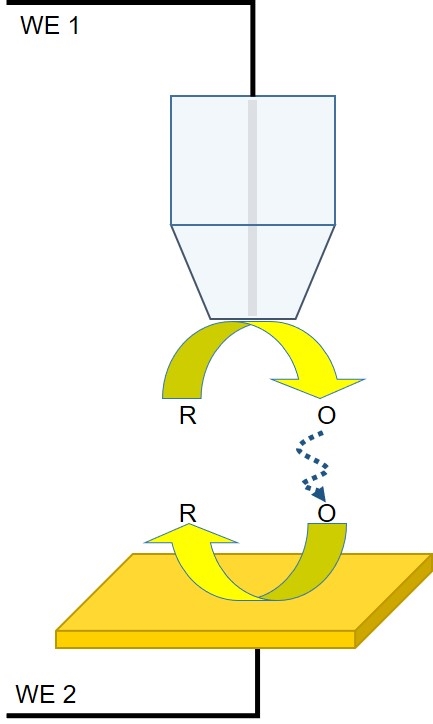 Figure 3: Diagram of the interaction between the probe and redox mediator in a TG/SC experiment.

In a TG/SC experiment, the redox mediator of interest is generated by the probe for collection by the sample (Fig. 3). Typically, in these measurements both the probe and the sample are biased to act as working electrodes, however, it may also be performed using a micropipette filled with the mediator of interest as the probe. Though less common than SG/TC, TG/SC has found use in kinetics studies, catalysis studies, and surface modification. 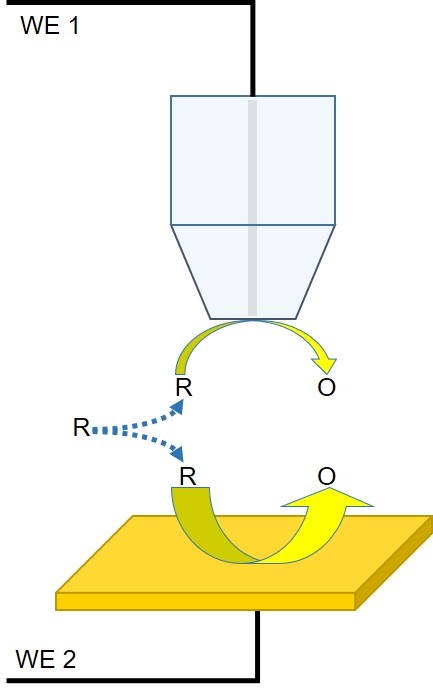 Figure 4: Diagram of the interaction between the probe and redox mediator in a competition mode experiment.

Using competition mode, it is possible to measure the local ability of a sample to interact with a redox mediator. In this mode, both the probe and the sample interact with the same mediator in solution. Though not always the case, the probe and the sample can both be connected as separate working electrodes and biased. Unlike in feedback mode, in competition mode, a decrease in the current measured at the probe is indicative of a sample region with increased activity towards the mediator. Though competition mode can be limited by the background current of the sample it has found limited use in corrosion and catalysis studies.

ac-SECM was initially introduced as a means of positioning the probe relative to the sample. However, its introduction as a means of imaging sample activity opened SECM up to systems it previously could not be used for. In ac-SECM, a sinusoidal bias, of a single frequency, is applied to a probe in close proximity to the sample surface. The probe can then be used to measure impedance, a reflection of the sample conductivity. The use of an ac signal removes the need for a redox mediator, meaning measurements can be performed without the mediator or electrolytic salt in setups similar to the real-world scenario. This is particularly beneficial when dealing with a system that is negatively affected by the presence of a mediator. For example, many commonly used mediators are toxic to living biological samples ruling out dc-SECM as a possible measurement option. Outside of biology, in corrosion, the use of a redox mediator is not always desirable because it can enhance or inhibit corrosion and, therefore, needs to be factored into the analysis of any results. ac-SECM should, therefore, be considered in a number of situations. Due to the signal measured ac-SECM should be considered when the sample conductivity/impedance is of particular interest. Because ac-SECM removes the need for the mediator and electrolytic salt, it should be considered when it is difficult to find a suitable redox mediator, for example when the sample has a poor interaction with typical mediators, or when the use of low conductivity solutions, like tap water, is of interest. 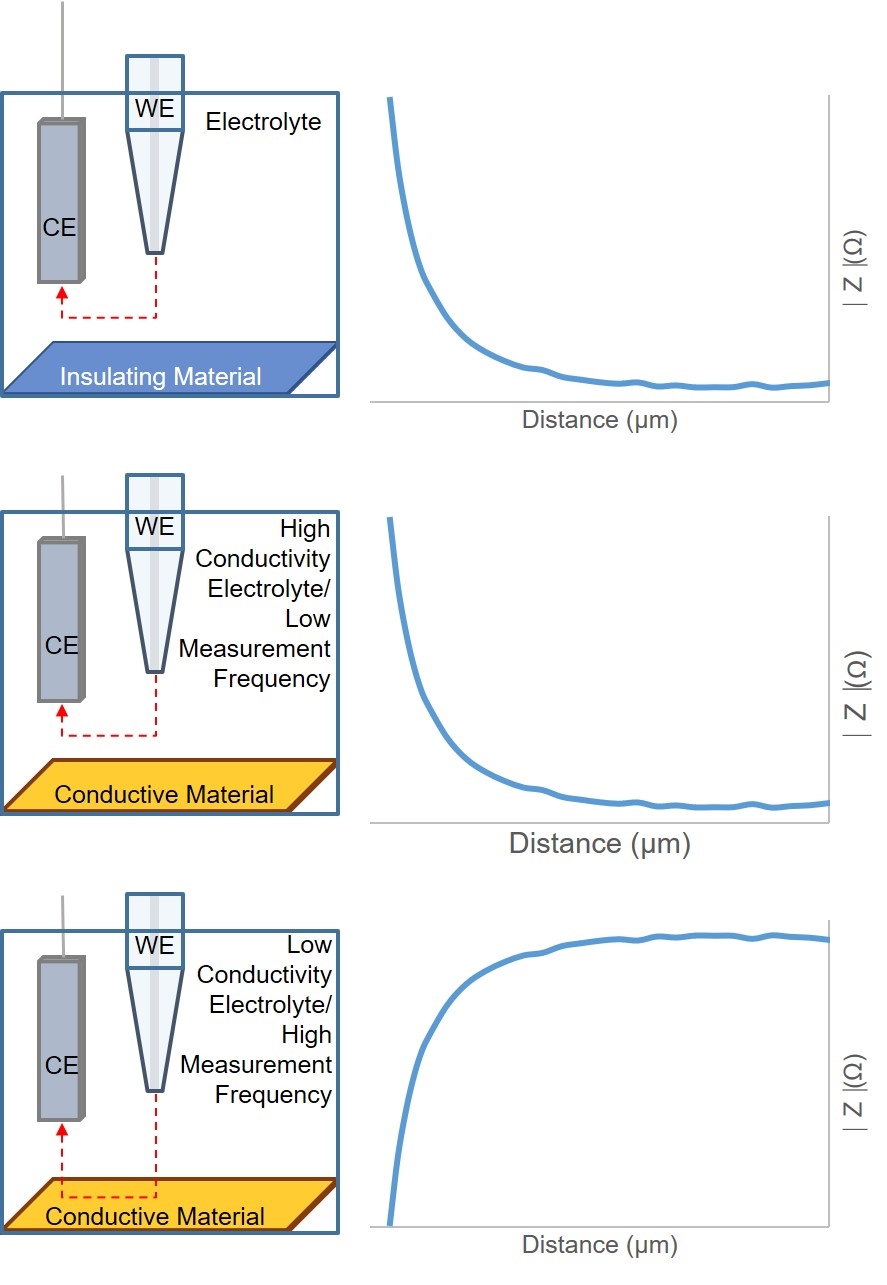 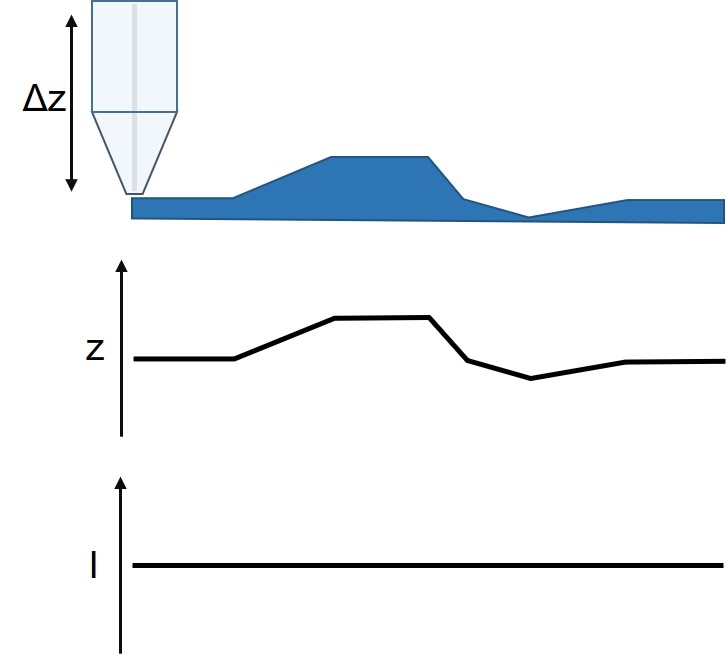 Figure 6: Diagram of the ic-SECM measurement and resulting topography and current signals.

ic-SECM is a constant distance mode of SECM developed in 2010 by the Warwick Electrochemistry and Interfaces Group. It is available exclusively on BioLogic’s M470 Scanning Electrochemical Workstation, which combines it with both the ac- and dc-SECM techniques. Using a mechanical signal ic-SECM precisely tracks the surface throughout the SECM experiment. With ic-SECM, therefore, the sample activity and sample topography are measured at the same time in a single pass experiment (Fig. 6). Unlike constant height SECM measurements, the activity measured during ic-SECM is due only to the sample activity.

What were those abbreviations again?

For further information please refer to the following application notes: