Which quench flow for my lab?

The chemical quench flow instrument, commonly called quench flow, is a member of the rapid kinetics instruments family. It is used to follow reactions on the milliseconds to seconds timescale. In a quench flow instrument, the reaction is initiated by mixing two reactants. The solution is allowed to age in a delay line (also called the aging line or aging loop) for a user-defined time before being stopped by a third sample (the quencher) in a second mixer. The solution is then collected for external analysis. By collecting samples at various aging times the user can build the kinetics of the reaction.

There are three ageing methods and three models of quench flow instrument, so here are tips to help to select the right instrument to best suit your needs.

In continuous flow mode, the solutions are injected at a constant flowrate in the mixers. The user selects the reactant volumes and how fast he/she wants to inject. The ageing time is the time spent by the reactants to move from mixer 1 (where the reaction is initiated) to mixer 2 (where the reaction is stopped). The ageing time can thus be easily calculated by dividing the volume of the delay line by the flow rate of solutions going through the line. An example of the driving sequence is given in Figure 1 using a 74µl delay line. The user injects 50µl of each solution (1:1:1 mixing ratio) in 25ms so flow rate in the delay line is 4ml/s: thus, ageing time is 74/4=18.5ms. 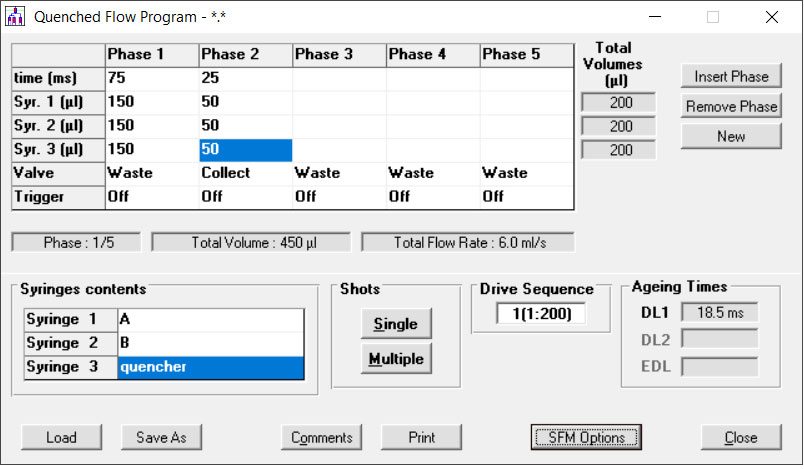 The limitation of this mode is the ability to generate turbulent mixing as mixers require a minimum flow rate (1ml/s) to generate turbulent conditions. Similarly, the flow rate of 12ml/s (maximum flow rate) is linked to the speed of the diverting valve and motor specifications. So, for a given delay line, only a range of aging time is achievable. For example, using a 74µl delay line, aging times from 6ms to 74ms can be obtained. To reach longer times the user sets a longer delay line. However, delay line volumes cannot be increased constantly, due to mechanical constraints. Also, the larger the delay line, the more samples needed for the experiments. For all these reasons, the continuous flow method is generally preferred for aging time below 300ms.

The interrupted flow mode is the traditional method used to reach aging times higher than 300 ms.  This pushing mode differs from the continuous flow mode as the experiment is carried out in several phases. First, the aging line is filled with the reactants. The samples are then allowed to age in the delay line for a pre-defined time before being pushed to mixer 2 for quenching. An example of such a sequence is given in the figure below. 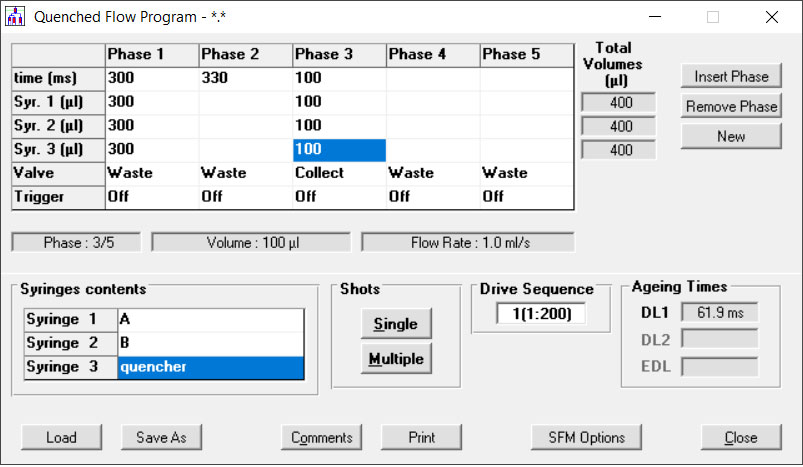 Phase 1 of the sequence is used to wash the delay line from previous experiments and the last microliters will be used to load the delay line. This will be followed by a 330 ms incubation to the mixing. Phase 3 is the collect phase where the aging line is emptied at exactly the same flow rate as has been loaded in phase 1. It is crucial to have the same mixing ratio and flow rate in phase 1 and 3 to collect a homogeneous aged solution. Because the flow rate is the same in both phases the loading/emptying time can be calculated easily: it is the volume of the delay line divided by flow rate. In the example in the above figure, the volume of the aging line is 224µl; and the flow rate in the aging line is 2 ml/s, so the loading/emptying time is 224/2=112 ms. Adding the incubation time, the total aging time for this experiment would thus be 442 ms. One can clearly see that the minimum flow rate is no longer a limitation in this mode, as users can keep the flow rate constant at each shot and just vary the incubation time.

This mode also has its own limitations as you cannot collect more samples than the volume you incubate in the aging line, which could be limiting for some analysis techniques that require 300-400µl of the sample. In such cases, the accumulation of experiments is required.

The pulse mode is a combination of the continuous flow and interrupted flow modes. Instead of filling the delay line continuously, the delay line is filled by micro-pulses separated by several micro incubation times The aging time is then defined by the duration of the n pulses to flow solutions from mixer 1 to mixer 2 and the incubation times between pulses. By accumulating more than n pulses the user can collect as much solution as required for analysis. 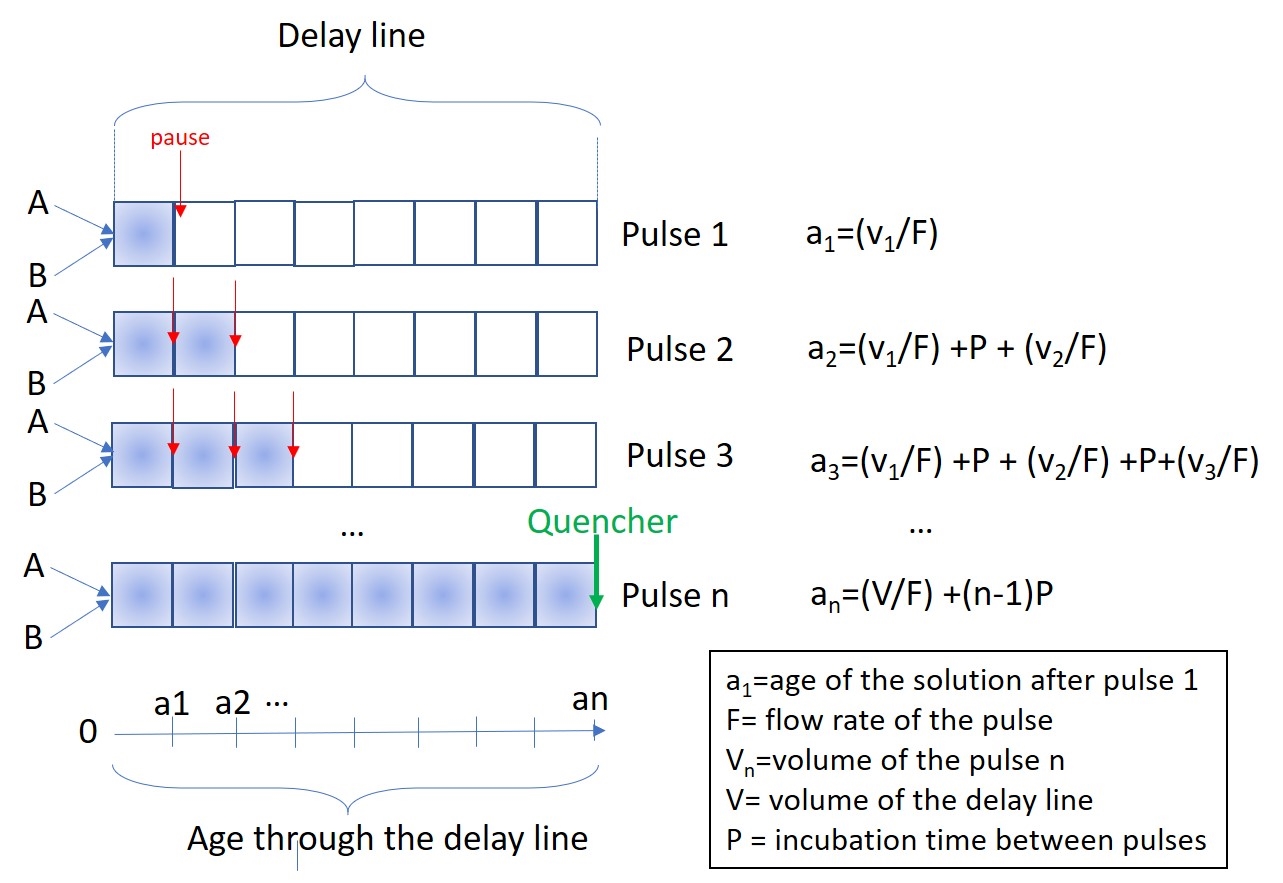 The mean flow rate value is achieved by varying the frequency of the pulses. The pulse frequency does not modify the turbulent conditions of each pulse. So, it means long aging times can be reached without changing the delay line, but just changing the incubation time between pulses. Thanks to the sub-microliter precision of stepping motors, pulse mode can then be applied to small delay lines.

– lower volumes of sample are required per experiment

– the same amount of sample is required, whatever the aging time.

From a user’s perspective, the pulse design (volume, numbers and frequency) is transparent as it is fully software controlled. The user only sets the volume of the sample to mix and the aging time he wants to reach. The Biokine software will automatically generate the right pulse parameters 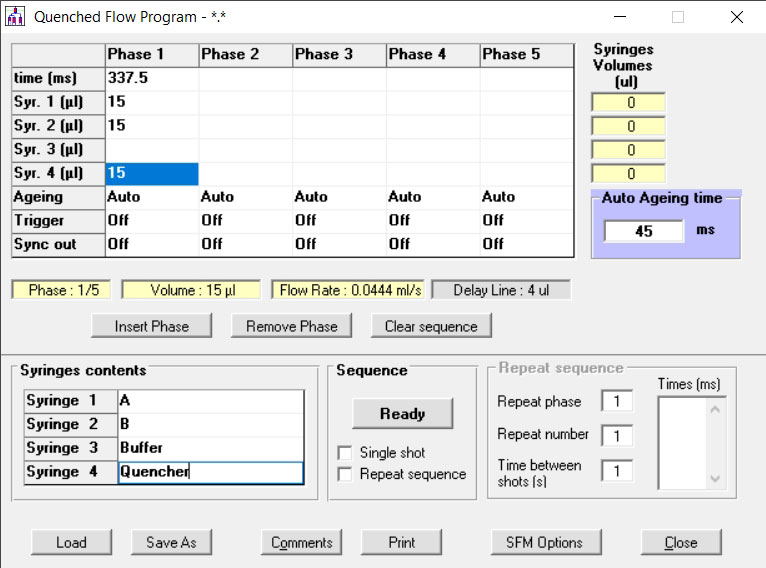 The choices on offer…

The SFM-3000/Q has 3 syringes and 2 mixers, it can thus only address single mixing applications (1 mixing step before quench).

The two systems use a set of delay lines so users need to adjust the delay line volume to the aging times he/she wants to reach. All aging modes are possible using these models: continuous flow mode is used for the smallest lines and thus shorter aging times (<300ms). Interrupted mode or pulse flow mode are used for longer times. The SFM-3000/Q and SFM-4000/Q are suitable for aging times from 2 ms to several seconds/minutes. The sample consumption depends on the delay line volume and on the selected mixing ratio. 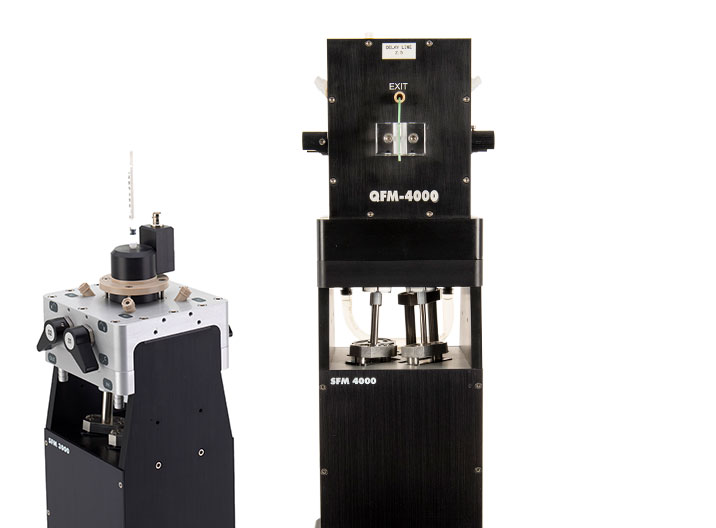 The QFM-4000 has 4 syringes and 2 mixers. It is therefore only suitable for single mixing applications (one mixing step before quenching). The QFM-4000 is based on the pulse flow technique, only aging points shorter than 5 ms would be used in continuous flow mode using this instrument.

Reaction times from a few milliseconds to seconds can be obtained with only one single aging line. The QFM-4000 achieves such a large time range with a single ageing line, by operating in pulse flow mode.

As the total flow rate in the pulse does not need to be high, driving syringes are smaller (compared to the SFM-3000/4000 configuration) and an injection of only 10-15µl of samples is possible at each shot.

Three syringes are connected to mixer 1, two are used for reactants and one is used for the buffer to wash the delay line and the flow path between experiments. An air purge is available to recover all quenched solution and to ensure no precious solution is lost in the instrument. A special zero dead volume mode is available when users do not wish to carry out a full kinetics –  but just want to catch a reaction intermediate. In this mode, the sample is loaded manually in the storage line and the buffer is used to propel the sample in the delay line.

A  complete kinetics series is carried out in minutes when this can take hours with rival instruments.

Ask the right questions. Identify the right instrument for your needs. 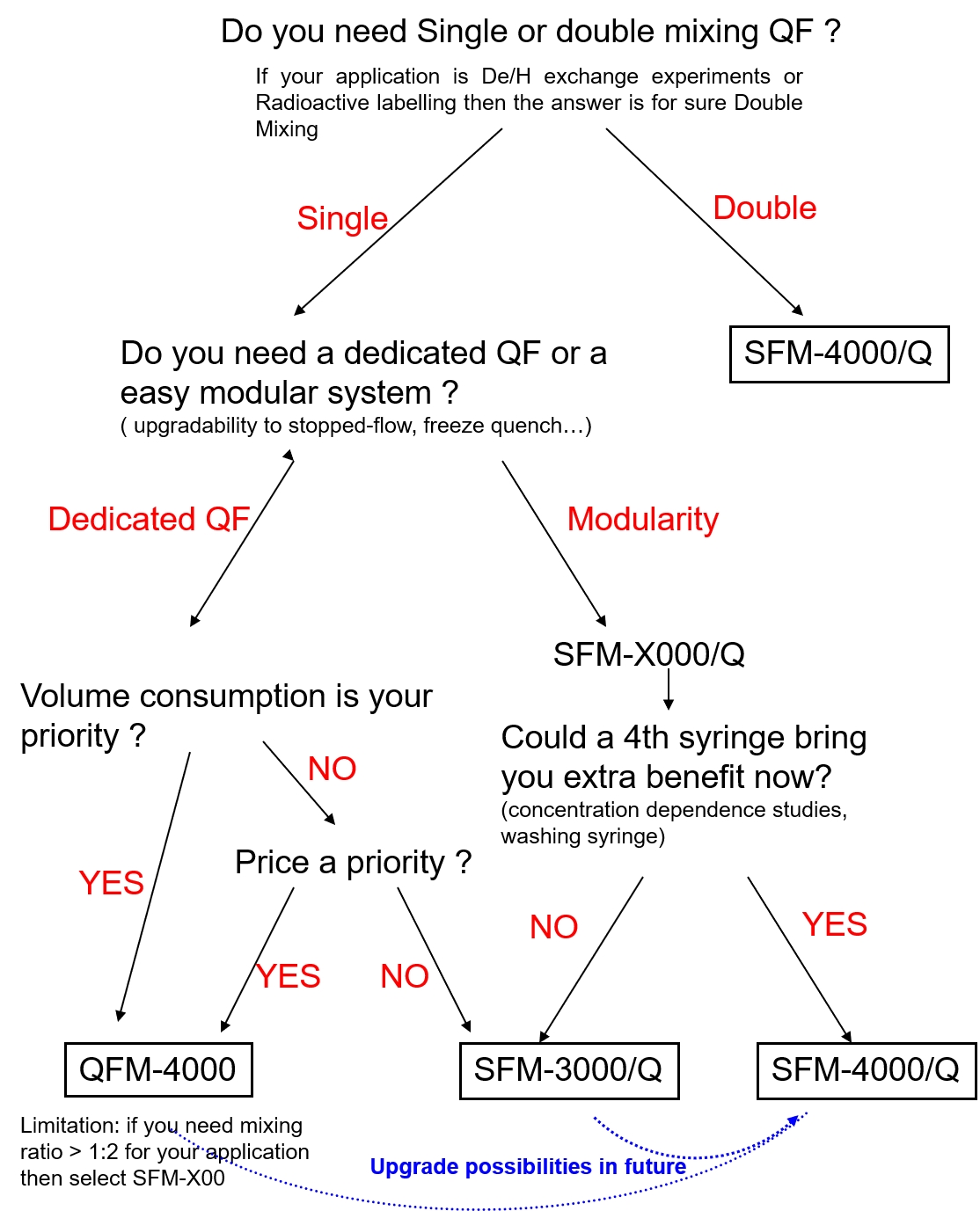 If you would like to know more about quench flow and how to select the right instrument for your needs, please download the following application note AN 37