Which stopped-flow for my lab?

Introduction: How to choose the stopped-flow that works for you…

BioLogic has developed a range of stopped-flow instruments to meet different needs. The SFM-2000/3000/4000 stopped-flows were developed to offer modularity or multi-mixing capabilities as opposed to the µSFM which was developed for micro-volume applications. You will find the questions you need to ask yourself below, to help you identify the best stopped-flow for your needs.

How many mixing steps?

All BioLogic stopped-flows are based on independent stepping motors. You have a choice of two, three, or four syringes and therefore 1, 2 or 3 mixers enabling you to perform a wide range of experiments. When selecting a stopped-flow it is more important to focus on the number of mixers rather than on the number of syringes as this really determines the applications you can cover. 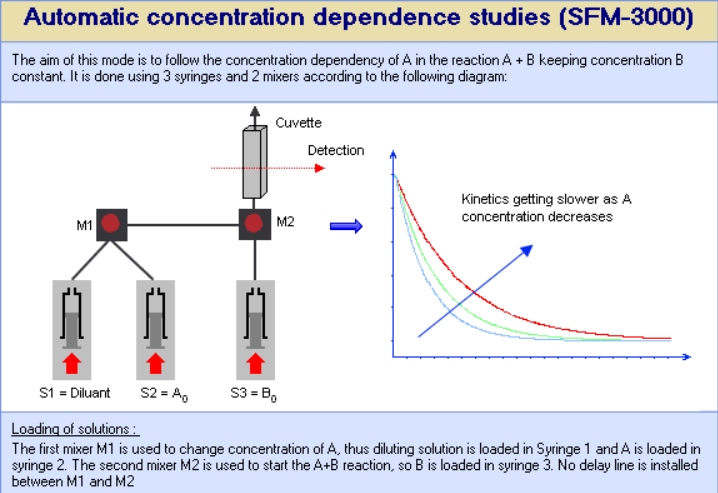 What modularity level for your stopped-flow?

The µSFM was optimized for small-volume operations so it can only be used with some micro cuvettes with a short light path. This can be a limiting factor for some detection techniques necessitating larger illumination volume. The µSFM can only be used for absorbance, fluorescence, fluorescence anisotropy, 90° light scattering, and X-ray (1.1 mm capillaries). If you think you may need to use other detectors like FT-IR, neutron scattering, conductivity then the SFM-X000 would be a better choice.

Modularity and your chosen mixing technique:

An instrument that can perform more than just stopped-flow techniques!

Thanks to their independent stepping motors Biologic stopped-flows can also be used to close techniques like chemical quench flow or freeze quench. Some mixing techniques like quench flow require more than one mixer so only the SFM-3000 and SFM-4000 stopped-flows can address such applications. The user can switch from stopped-flow mode to another mode in a couple of minutes thanks to the open design of the mixing chamber. The µSFM does not have this modularity level.

Sample cost and stopped-flow experiments? What samples do I use – how does this impact on my choice of stopped-flow?

Sample volume availability or simply its cost can be an important consideration. The µSFM was specially developed for micro-volume applications so this will be the model to consider if you work with expensive or difficult to procure samples. With only 100µl in a vial you will have enough samples to prime the system and to run about 10 experiments. Using an asymmetric ratio you can even decrease sample consumption to 3µl per experiment. Handling such small volumes is possible thanks to the microcell used and to the design of the observation head. The SFM-X000 was developed using another philosophy, which was to offer the shortest dead time and modularity (in terms of the number of syringes, number of cuvettes, number of detection techniques, upgradability, etc.) to meet most of the needs of most applications. Because of this modularity, a compromise had to be made on internal volumes and that is why the SFM-X000 uses slightly more solution than a µSFM. Using an SFM-X000 the volume per shot will depend on the mixing ratio and on the volume of cuvettes used, usually, you need about 50-100µl per experiment. So this means that you need 500µl-1000µl of starting solution to prime the system and to run a series of shots. If you have less than 500µl then the µSFM is probably the best option.

When hesitating between a µSFM and a SFM-2000 stopped flow, the real question is: do I place more importance on sample consumption or dead time/modularity?

The importance of dead time with Stopped-flow choice.

If you need dead time below 1ms then the SFM-2000/3000/4000 would be the ideal choice. It offers 0.7ms in standard and it can be decreased to 200µs using the micro cuvette accessory. The µSFM offers a 1ms dead time. The micro cuvette used as an SFM option or inside the µSFM is the same one, so it means the sensitivity is the same for both instruments.

If you do not work with very fast reactions then dead time is less important, as not much will happen during the first millisecond so all models could meet your need and the choice can be done on other parameters.

The µSFM is limited to 1:9 mixing ratio (10 time dilution) so if you need to perform higher mixing ratios then the SFM-X000 is the right choice.

Using a high mixing ratio: if your application is a single mixing experiment it could be beneficial to have a third or fourth syringe to optimize the mixing conditions, reduce sample consumption and dead time. In figure 2 you can see a mixing sequence with a 10:1 mixing ratio. The minimum volume per shot is limited by the minimum volume you can push using the standard 10 ml syringe. The total maximum flow rate is limited by the speed of syringe 1 (the one pushing the biggest volume) so it means the highest flow rate you can reach is 8.5ml/s and the dead time is thus 1.8ms. 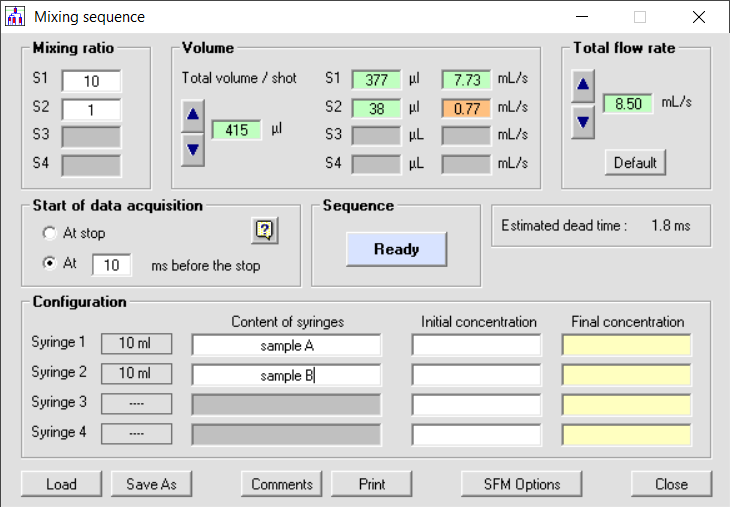 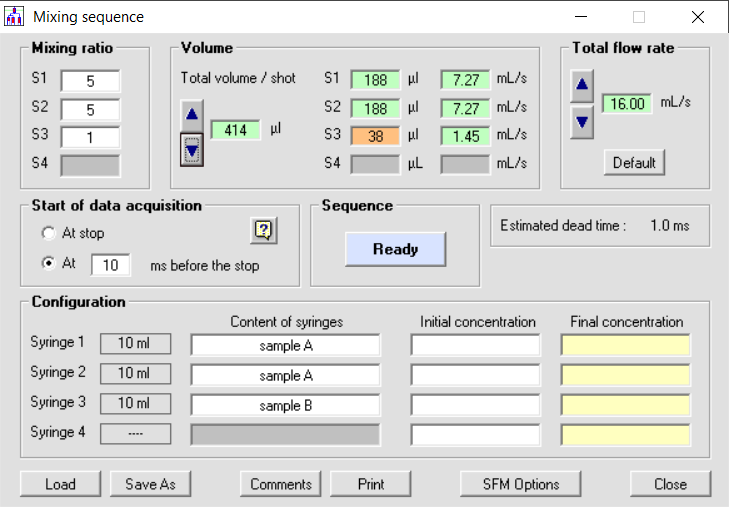 In a high mixing ratio application, the total volume per experiment can be reduced by installing a smaller syringe in position 3, the minimum injection volume per syringe is reduced without affecting the dead time (see figure 3)

All in all, you can save around 50% of samples and reduce dead time by a factor of 2 using an SFM-3000 or SFM-4000 stopped-flow when performing a high-mixing ratio. This could be a very important consideration for applications such as protein refolding and unfolding that usually require large concentration jumps and thus a large mixing ratio.

The µSFM is probably the right choice of stopped-flow when:

Access to clean water is a major global problem and a key health concern worldwide. This article concerns research using carbon nanotubes as part of the desalination process.
More info

Which quench flow for my lab?

There are three ageing methods and three models of quench flow instrument. So, which one is right for me?
More info

Stopped-flow are the only instruments able to quantify the efficiency of aquaporin channels by measuring water permeability following an osmotic shock.
More info