Access to clean water is a major global problem and a key health concern worldwide. Over 785 million people live far from any clean water source, according to a WHO/UNICEF joint report issued in 2019.  Furthermore, global warming may further exacerbate this problem.

Reverse Osmosis is a major industrial technology currently used to convert saltwater into clean, drinkable water. Reverse osmosis works by removing contaminants and ions from saltwater when pressure forces it through a permeable membrane. The thin-film composite membrane has small pores that block contaminants but allows water molecules to flow freely.

However, the technology is limited by the trade-off between the quality of the separation process and the rate at which water flows through the membrane; a trade-off that restricts the efficiency of the technology.

Some micropollutants or bacteria, which require additional treatment, can pass through the membrane which then requires additional and costly treatment as part of the desalination process. Therefore, a new generation of membranes is necessary to increase the efficiency of the process and make the technology more cost-effective.

The principle of reverse osmosis

The development of biomimetic membranes has significantly improved the desalination process. These biomimetic membranes are based on aquaporins, a membrane protein found in nature to regulate the water channels of cells. Aquaporins are very efficient and selective and stopped-flow instruments have proved to be one of the major instruments needed to quantify their efficiency (See application note AN35 for more information). Aquaporin channels are so narrow that only water molecules can pass through them. Therefore, membranes with a high density of embedded aquaporins could significantly improve the efficiency of the desalination process. However, some development efforts are still needed for aquaporin-based membranes to increase their lifetime, stability and to reduce their cost in order for them to completely replace traditional membranes.

The development of new artificial water channels that mimic aquaporin could prove to be the way to improve the membrane technology. Narrow carbon nanotubes seem to be the perfect candidate. In a recent study published in Science Advances Li et al.* demonstrate the efficiency of 0.8 nanometer diameter nanotubes to transport water and reject chloride ions. Li and al. have inserted the nanotubes in a lipid bilayer of vesicles as already achieved with aquaporin, and use BioLogic stopped-flow (Click here) to quantify the water efficiency. In this study, the water permeability is estimated, following the shrinkage of vesicles by measuring fluorescence rather than 90° light scattering. MOS-200 spectrometers can be used for both fluorescence and 90° light scattering measurements: in a scattering experiment the total light scattered is measured by the photomultiplier detector of the MOS-200, whereas in fluorescence mode a bandpass or long-pass filter is used to discriminate the excitation wavelength and only select the emission wavelengths. The water permeability of enriched carbon nanotubes vesicles was increased by a factor of two when compared to aquaporin-based vesicles. 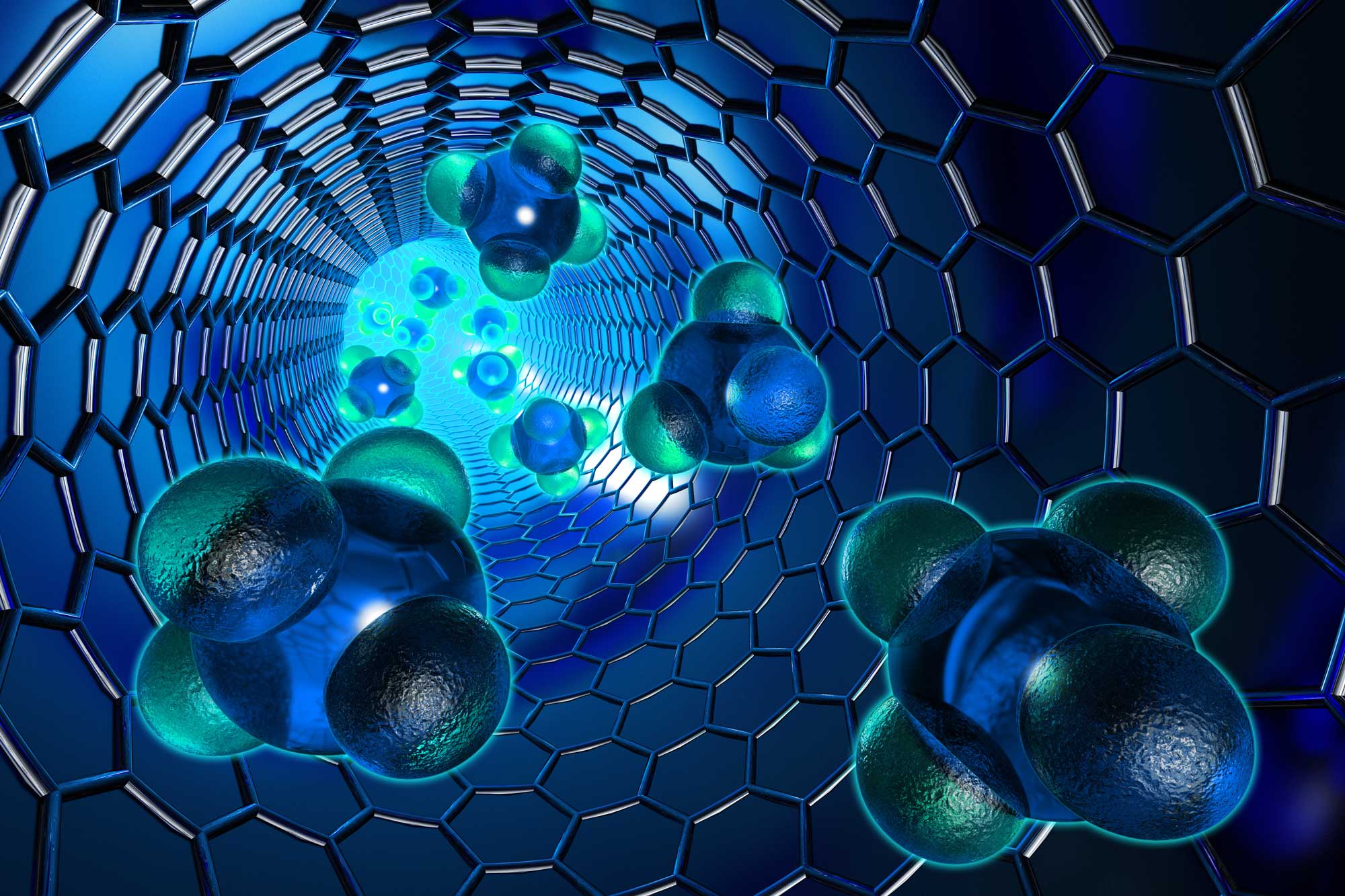 The ionic selectivity is also a key parameter to estimate the efficiency of a membrane, so Li et al. also use a similar stopped-flow set-up to follow chloride influx into vesicles.   Carbon nanotubes strongly reject chloride ions and demonstrate water-salt permselectivity values comparable to those of commercial desalination membranes.

This article from Li et al. also made the cover of the 2020, September 16th edition of Science Advances magazine.