Scanning Electrochemical Microscopy (SECM) is one technique that allows the high throughput screening of novel electrocatalytic materials for these purposes. For SECM to be used to screen a new electrocatalytic material, the electrocatalyst and the SECM probe should be of the same scale, i.e. for the typical micron-scale probe, the electrocatalytic substrate must also be on the micron scale. Unfortunately, this can be prohibitively expensive and difficult to achieve by traditional means, which can limit the applicability of the technique. Itamar Liberman et al, of Ben-Gurion University of the Negev recently demonstrated that SECM itself could be employed to produce an electrocatalyst of the correct scale to be investigated by SECM [1], employing BioLogic’s SECM150 to do so. In this work, SECM was used to electrochemically convert the ZIF-67 Metal-Organic Framework (MOF) to patterns of catalytic CoSx, selected because of its high activity to the Hydrogen Evolution Reaction (HER). After formation using the SECM150 ex-situ tests were performed to confirm the success of the MOF patterning. Once the process of forming the electrocatalytic CoSx had been verified, the SECM patterning technique was used to locally form and then probe the activity of the CoSx in situ, by measuring the H2 oxidation current as an indicator of catalytic activity towards HER. As illustrated in Fig. 1, regions that are highly active towards HER result in a higher measured probe current. 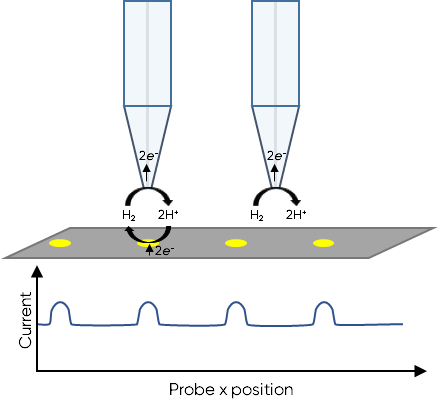 Figure 1: When SECM is used to screen the electrocatalytic activity of a sample, HER catalytic areas (yellow) will show a higher probe current than areas that do not catalyze HER (gray).

By performing the entire formation and screening process of the CoSx catalyst without the need to remove the sample, Liberman et al have demonstrated a novel method of using SECM to form in situ and screen micron-scale catalytic materials in a high throughput manner. This novel method of patterning MOFs not only has applications in electrocatalysis but also in sensors and transistors.

For more details, the full article and supporting information can be accessed here.

Key factors to consider when looking for a scanning electrochemical workstation.

Factors of interest when looking at a scanning electrochemical workstation are discussed.
More info

The scanning probe electrochemistry techniques on the M470 are compared.
More info