The BT-Lab® software offers great usability and flexibility for battery cycling. The powerful “ModuloBat” method offers 15 control modes for easy programming of unique sequences, while the interface is unique and simple, simultaneously showing the experiment parameters and the corresponding graph of each selected channel.

All channels can be viewed simultaneously on an advanced global view. The status of each channel is displayed with different colors to give quick, informative visual indicators. The time, current, voltage and charge values are all displayed on-line.

The firmware of the BCS-800 series is a stand-alone operating system. It is loaded into the instrument at the interface launch with hardware control completely autonomous while the experiment is running. BT-Lab® software is Windows-based, compatible with either 64-bit or 32-bit operating systems. It is also a multi-device system, able to control several modules simultaneously.

BT-Lab® software allows the user to define the critical parameters related to their batteries, such as the name, materials, and capacity in the “Battery cell characteristics” section. For experimental definition, the ModuloBat method can be composed of up to 100 different sequences. For any given sequence, the control mode can be selected from 15 mode options and different control modes can be easily linked.

The controlled current can also be defined as a function of the capacity rate of the cell, allowing the user to create more unique and flexible experiments. To save time, each setup can be saved and reloaded on all selected channels simultaneously. 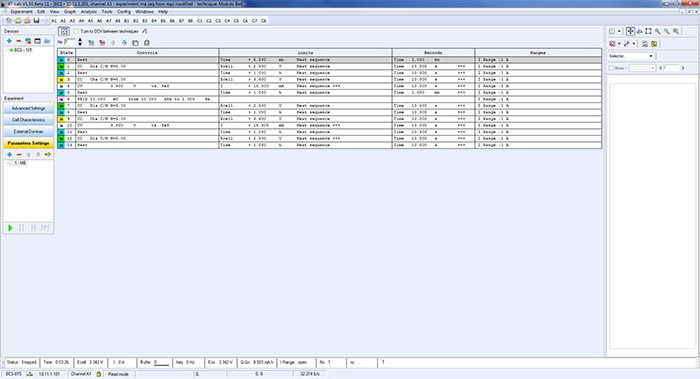 The ModuloBat method includes the capability for electrochemical impedance spectroscopy (EIS) measurements on every channel in a frequency range of 10 mHz to 10 kHz, both in potentiostatic and galvanostatic modes.

In every sequence of ModuloBat, up to three experimental limits can be selected on measured values such as time, current voltage, temperature, or on a variation of this value. Different, selectable actions may be taken when a limit is reached, such as “stop” the experiment or “go to the sequence N”. Additionally, safety limits can be added on each channel to shut down the channel in the event something goes wrong during the experiment.

Several recording conditions can be defined for an optimized amount of data points. Multiple recording conditions with “OR” commands are used to avoid missing any variation in the cell behavior during the data recording while also limiting the total data collected to reasonable volumes for faster analysis.

BT-Lab’s graphic package is embedded with the software and includes powerful tools to create graph templates and analyze data. This package offers a unique trace filtering option by channel. This results in a multigraph window capable of displaying up to 64 graphs within a single window. With the advanced graph properties, the user can add and customize new variables for each axis. Powerful analysis tools (such as integral, circular or linear fit) are also available in BT-Lab®.