Internal Resistance series. Part II: How to determine the internal resistance of a battery

Part II: How to determine the internal resistance of a battery?

The field of battery and energy storage continues to grow exponentially with the development of consumer electronics and electric vehicles, among other key technologies. As a result, laboratories and industry are constantly looking to find new ways of improving battery performance and gaining competitive advantage, notably via reliability and longer battery life. They also need to understand and quantify battery degradation during its cycle life. One of the key parameters affecting those challenges is battery internal resistance. This series of 3 articles will help you to understand what internal resistance is and how it can be measured.

DC measurement of the internal resistance

As soon as electrical contact is established and a non-zero current flows through the battery, an ohmic contribution appears. This ohmic contribution disappears when the electric current has been cut [3]. The DC measurement of the internal resistance – also called the current interrupt method or the potential-decay method – is based on this observation. This measurement gives important information about the internal resistance. The principle of the determination using DC measurement is to apply a direct current to the battery and to measure the shift between the potential of the cell just before the pulse and the potential of the cell after a specified duration. Figure 1 shows the galvanostatic pulse starting at a time $t_1$ and the response of the system in voltage. 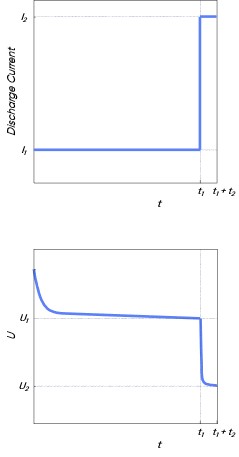 Figure 1: Current and voltage change versus time after current pulse applied at $\pmb{t}_\mathbf{1}$.

The internal resistance is then calculated using the following relationship:

The current applied to the battery during the pulse and the duration of the pulse are specified in standards and procedures. For instance, the USABC (the United States Advanced Battery Consortium) procedure stipulates a step duration $\Delta t$ of 30 [2] whereas the IEC 61960 standard [1] describes a 1-second pulse after a period of 10 seconds discharge at a C-rate of 0.2 C. Again, the most important thing here is to follow the same procedure for two measurements intended for comparison.

The main advantage of this kind of technique is that it is very simple to run. With BioLogic instruments, for example, using a DCIR (Direct Current Internal Resistance) sequence of the ModuloBat technique available in EC-Lab® and BT-Lab® software, users are able to determine the internal resistance by DC measurement method. Visit the next article in this series if you want to find more about the technique.

EIS (Electrochemical Impedance Spectroscopy) measurements are described and explained in the Learning Center article “What is EIS?”. The frequency dependence of the impedance of the cell can be investigated with impedance spectroscopy and a correct fitting of the Nyquist diagram [6].

Nyquist plots are a very useful means of determining the behavior of the battery according to the frequency.

Thus, EIS gives the user an overview of battery cell behavior. Depending on the cell type and the experimental setup used, the measurement of one frequency can show a result in the inductive region or in the capacitive region.

Only EIS allows the determination of the impedance for a frequency range and so, the detection of many aging effects. Graphs made at different frequencies and subsequent fitting can prevent the user from favoring a particular point on the graph, allowing the user to account for the change of the battery during operation or aging, and for the effect of the inductance which can dramatically affect resistive high-frequency battery behavior.

This is a very fast method (it can be carried out in seconds) of determining internal resistance with no deterioration of the cell.

A sinusoidal signal at a given frequency is applied to the cell. Typically, 1 kHz frequency is chosen for cells with relatively low capacities because they can have a resistance close to the point where $\text{Im}\,Z=0$. This helps to obtain reliable and repeatable measurements. The amplitude of the signal must be low enough for the system to be considered linear. To be more specific, the IEC standard mentions that the amplitude must be lower than 20 mV.

The internal resistance can then be calculated thanks to the equation below:

The choice of frequency is crucial. Nonetheless, it is a highly effective method of evaluating batteries’ internal resistance. Such an experiment is very easy to set up with BioLogic potentiostats and battery cyclers thanks to the ACIR (Alternating Current Internal Resistance) techniques included in EC-Lab and BT-Lab, BioLogic’s benchmark control and analysis software.

[3] Application note #62 “How to measure the internal resistance of a battery using EIS?”

Internal Resistance series. Part I: What is internal resistance in a battery?

What is internal resistance in a battery?
More info

How to avoid side reactions during battery charging/discharging?

How can we avoid unwanted reactions at the electrodes during battery charging/discharging?
More info