Why waste money on nitrogen for Circular Dichroism?

For decades, some Circular Dichroism (CD) instrument manufacturers have made nitrogen (N2) flushing of optics an absolute requirement for CD measurements, but is it always really necessary? The answer is no.

The main reason given is the need to remove oxygen and to reduce its light absorption in the far-UV range.  This is true. But it is also true that nitrogen use should be limited to far-UV needs and not used with near UV, visible, or NIR regions. This is because oxygen absorbs light in the far UV and the deeper you go in the UV the more it absorbs (see figure1). 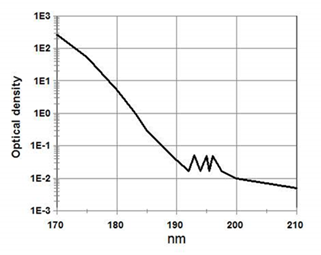 The high voltages used by the CD detector during measurements are directly linked to light levels. So, the less light you have, the higher the high voltage is. And usually, data obtained with a high voltage above 550-600V are considered doubtful. To see the real effect of oxygen one can thus run a lamp spectrum with nitrogen flushing (so without oxygen in the light path) or without nitrogen (so with oxygen present in the light path). Spectra are shown in figure 2. 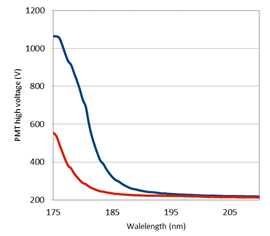 Below 195 nm we can clearly see the importance of nitrogen flushing. Thanks to nitrogen, the CD signal can be recorded accurately below 195 nm. However, above 195 nm the high voltage is similar, so it means the oxygen is not absorbing light and nitrogen purging, therefore, becomes useless for the measurement.

So, if the aim of the experiment is to measure a spectrum in the far UV, for example, to measure a protein spectrum between 180nm and 250nm to determine its secondary structure, then yes nitrogen flushing is necessary as we need to go below 195 nm. But if the plan is to work in the aromatic region (270-350 nm) and obtain information about the tertiary structure of a protein, or if the plan is to work in the visible region (Soret band, chiral centers, etc) then nitrogen use is completely useless. So why is it considered absolutely necessary when it is only required for 2% of the CD instrument’s wavelength range?

But behind this absorption argument, there is another reason directly linked to the design of the lamp housing. To catch as much light as possible from the lamp bulb, some reflective mirrors are installed inside the lamp housing to redirect the light to the entrance of the monochromator. To maximize efficiency, these mirrors have a reflective coating that is highly sensitive to oxidation. The CD instruments use high-energy xenon lamps to be able to scan in the UV range. So, if there is oxygen around the lamp it will be transformed into ozone.

And as ozone is a very powerful oxidating agent, it will attack and irremediably damage the coating of the reflective mirrors in a couple of seconds. Nitrogen is therefore necessary to protect the optics and not really for experimental needs.

The lamp housing of the MOS-500 does not have any fragile ozone-sensitive reflective mirrors. The lamp is cleverly positioned to optimize light collection and an auto adjustable focusing lens is used to increase the light level at every single wavelength (patented). This lens is made of silica to allow light transmission down to 163nm. The ozone produced cannot escape to the rest of the optical bench and cannot damage the inside of the lamp housing, it is therefore safe to operate the instrument. Therefore, if the wavelength range of interest for your sample matches the absorption region of oxygen then the amount of light reaching the sample will be too low. Ultimately, no light will reach the detector. The consequence is a too noisy or distorted signal which cannot be trusted for data analysis. So, which wavelengths are really suited to nitrogen flushing?

But even if you wish to scan below 195nm the need for nitrogen flushing may be balanced by the light path of the quartz cuvette you use for the experiment.

A CD instrument often uses accessories like a Peltier for thermal denaturation or a titrator and these accessories require a long path observation cell. Indeed, most titrations are performed on a 1 cm light path cuvette in order to create enough space for the titrator’s tubes and a magnetic stirrer. With such a light path, the absorption of the solvent or buffer used also limits the theoretical minimum wavelength (called the cut-off wavelength) you can reach. For example, using a 0.1M sodium phosphate buffer the wavelength cut-off will be at 195 nm using a 1 cm light path. For most organic solvents the cut-off is between 210 and 250 nm. In other words, this means that measurements below this cut-off wavelength are impossible. The same limitation is applied to thermal denaturation as the user needs a big enough cuvette so that a temperature probe can be inserted through a cap. This is why almost all titrations and denaturation experiments (even in scanning mode) are performed above 195nm and thus do not really require nitrogen purging.

The possibility to use a CD instrument without N2 purge is also highly beneficial for all single wavelength measurements such as stopped-flow, slow kinetics, titrations or melting experiments. Indeed, the lowest wavelength commonly used in stopped-flow application is around 222 nm to follow the change of alpha-helix structure, so well above the 195 nm wavelength limit. It therefore means that nitrogen is never required when doing kinetics. Single wavelength titrations and thermal denaturations use similar wavelength limits to stopped-flow, so, for these measurements the nitrogen purge is also useless.

MOS-500 CD instruments with stopped-flow attached: N2 is never required for such application.

The nitrogen flushing of optics is only useful when you need to work below 195 nm and when using a small light path cuvette. For a lot of applications or when using CD accessories it is completely useless, a CD spectrometer like the MOS-500 without N2 can result in cost-savings of thousands of euros/dollars per year and avoid instruments being made redundant if you run out of N2 in the lab.

Stopped-Flow & Deadtime: Everything you need to know

50 µl of sample is all you need for a series of stopped-flow experiment!

Reducing sample consumption in stopped-flow experiments has always been a high priority as the cost of samples (proteins, peptides etc.) can equate to hundreds or thousands of dollars per milliliter.
More info